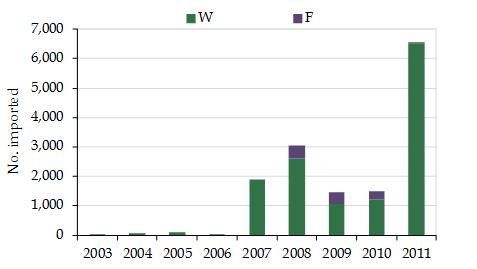 EU-reported imports of live coral of Turbinaria reniformis by source, all purposes, 2003-2011 (no imports were reported in 2002).

In 2011, all EU imports comprised live corals (6542 corals) traded for commercial purposes. The majority (99%) were wild-sourced and directly imported from Australia while the remainder were source ‘F’ corals imported directly from Indonesia. Imports of live, wild-sourced corals increased more than five-fold between 2010 and 2011. The SRG formed a positive opinion for wild specimens from Australia on 20/06/2011. As per CITES Notification No. 2012/047, Turbinaria is one of the coral taxa where reporting trade at the genus level is acceptable; several other species of Turbinaria also occur in Australia.