As in 2010, S. australis met the ‘sharp increase’ criterion and EU imports consisted of live, wild-sourced corals imported directly from Australia for commercial purposes (8544 corals); imports of live, wild-sourced corals increased by 67% between 2010 and 2011. Adequate management of coral resources generally appears to be in place in Australia (see for instance SRG 64/11). As per CITES Notification No. 2012/047, Scolymia is one of the coral taxa where trade at the genus level is acceptable; Scolymia vitiensis also occurs in Australia. 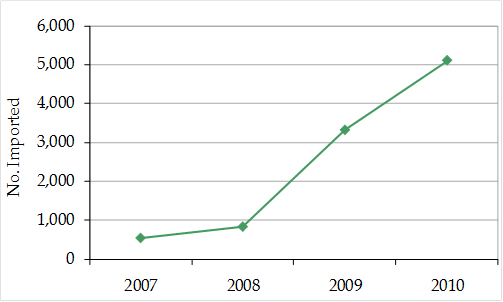 EU imports in 2010 principally comprised live, wild-sourced corals (5,109 corals), with an additional 245 wild-sourced, raw corals also imported. All trade was imported directly from Australia for commercial purposes. Between 2001 and 2006, the only imports reported by the EU were 35 live corals imported in 2002; imports of live, wild-sourced corals have increased every year since 2007, with a 54% increase between 2009 and 2010.