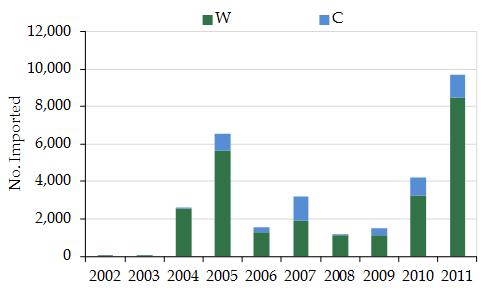 In 2011, imports of P. reticulatus primarily consisted of skins (9696 skins and 23 m of skins), of which the majority (87%) were wild-sourced while the remainder captive-bred. All trade was for commercial purposes. The majority of the wild-sourced skins were imported directly from Malaysia; all captive-bred skins originated in Viet Nam. Imports of wild-sourced skins accounted for 74% of Malaysia’s export quota of 12 000 wild-sourced specimens in 2011 (applied to Sabah only). Total imports of skins in 2011 reached their highest level over the period 2002-2011 and imports of wild-sourced skins more than doubled between 2010 and 2011. Denmark reported the export of two wild-sourced skins to Iceland for commercial purposes; no trade to other candidate countries was reported by either candidate countries or exporters in 2011. The SRG formed a negative opinion for wild specimens from Peninsular Malaysia on 05/09/2002; a formal suspension has been in place since 30/04/2004.