This species was selected on the basis of high volume trade, as in 2010, and in 2011 EU imports principally comprised wild-sourced and captive-bred skins traded for commercial purposes (totalling 262 868 skins from all sources). Notable quantities of small leather products were also imported (28 772 products), the majority wild-sourced. Between 2010 and 2011, total imports of skins (all sources) increased by 44%, while imports of small leather products decreased by 37%. The majority of the captive-bred trade originated in Lao PDR and Viet Nam, while the wild-sourced trade primarily originated in Indonesia. The SRG formed a negative opinion for wild specimens from Viet Nam on 07/12/2012; the positive opinion for wild specimens from Indonesia was removed on 07/12/2012, but re-formed on 28/05/2013. The species, including populations from Indonesia, Lao PDR and Viet Nam is currently under review as part of the CITES Review of Significant Trade process. 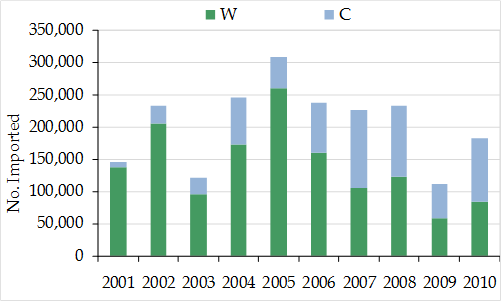 EU-reported imports of Python reticulatus skins (excluding skins reported by weight or length) from the two main sources (‘W’ and ‘C’), all purposes, 2001-2010.