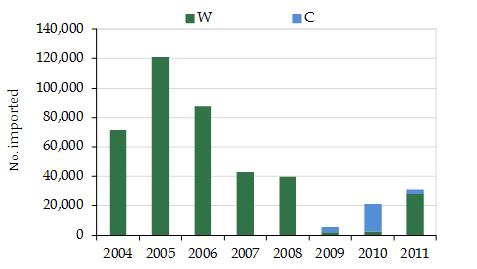 In 2011, EU imports consisted primarily of skins (31 126 skins) traded for commercial purposes, the majority of which were wild-sourced and originated in Indonesia. EU imports accounted for 78% of Indonesia’s export quota of 36 936 wild-sourced skins and skin products in 2011. Imports of wild-sourced skins increased more than ten-fold between 2010 and 2011, while imports of captive-bred skins decreased by 84%. A positive opinion was formed for specimens from Indonesia at SRG 30 on 01/07/2004, subject to the use of species specific quotas, which was reconfirmed  at SRG40 on 27/03/2007, as the population of the species was considered to be increasing in oil-palm plantations in the country.