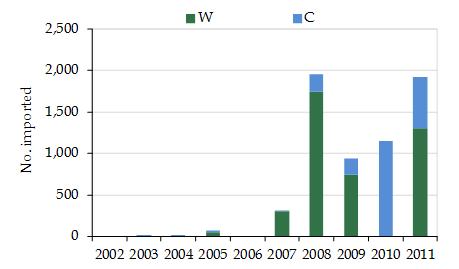 Imports of live Psittacus erithacus reported by candidate countries from the two main sources (‘W’ includes ‘U’), all purposes, 2002-2011.

In 2011, Turkey reported the import of 1920 live individuals for commercial purposes, of which 68% were wild-sourced and the remainder captive-bred. The wild-sourced individuals principally originated in Congo (69%) with smaller quantities originating in Cameroon (15%) and Guinea (15%).Between 2010 and 2011, trade in live individuals (all sources) increased by 67%; no wild-sourced imports were reported in 2010. Slovenia reported the direct export of two live individuals of unknown source to Croatia as personal possessions in 2011; no trade to other candidate countries was reported by either candidate countries or exporters in 2011. The SRG formed positive opinions for wild specimens from Cameroon and Congo on 12/06/2006 and 05/09/2002, respectively.