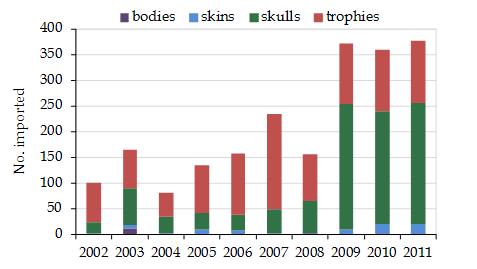 EU imports of Papio ursinus consisted primarily of wild-sourced hunting trophies and trophy items in 2011, comprising 241 skulls, 129 trophies, 19 bones, 20 skins, 16 teeth, one body and one tail. In addition, eight trophies, five skulls and one skin were reported without a source or purpose specified. Trade in trophy items that can easily be equated to individuals (trophies, skulls, skins, bodies and tails) equated to approximately 406 individuals; a permit analysis revealed that six of the skulls were imported on the same permits as other trophy items, potentially reducing the number of animals involved to 400. This represents an increase of 11% relative to 2010, with imports in 2011 reaching their highest level over the period 2002-2011. Trophies and trophy items principally originated in Namibia (58%), South Africa (23%) and Zimbabwe (16%). The SRG confirmed positive opinions for wild specimens from South Africa and Zimbabwe on 29/10/2001. Although trade has increased notably since that time, the species is generally considered to be common and widespread.