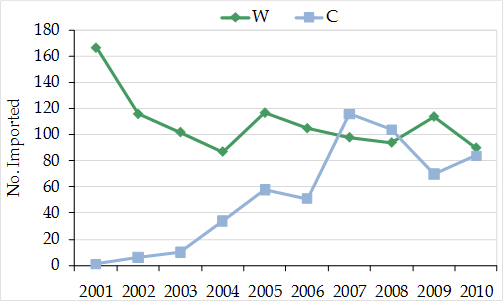 With the exception of imports for scientific purposes, wild-sourced imports in 2010 comprised 77 trophies, 11 skins, two skulls and two feet (all purpose ‘H’ or ‘P’), equating to approximately 91 individuals in trade. A permit analysis indicates that several trophy items were imported on the same permit as another item, possibly reducing the number of animals involved to 88. Imports of captive-bred parts and derivatives comprised 80 trophies, 28 teeth, three bodies and one skull, equating to approximately 84 individuals in trade. In addition, 34 captive-bred, live animals were imported. Wild-sourced trophy imports decreased between 2009 and 2010, while captive-bred imports increased.