EU-reported imports in 2011 consisted of live animals traded for commercial purposes, of which 72% were captive-bred and the remainder were reported without a source specified. All trade in 2011 was imported directly from China and Taiwan, Province of China. Live imports increased by 15% between 2010 and 2011, while the number of wild-sourced animals imported decreased from 10 010 in 2010 to zero in 2011. Whilst listed in Annex C (hence SRG opinions are not applicable), the species was reviewed for SRG 62 (SRG 62/8) to assess whether it might merit listing in Annex B. 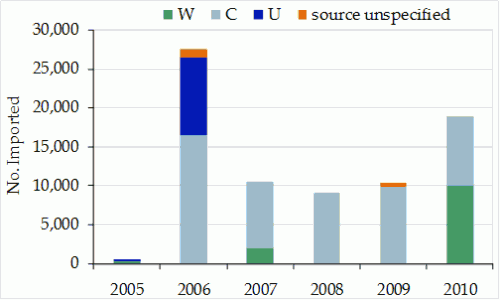 EU-reported imports of live Mauremys sinensis by source, all purposes, 2001-2010.

EU imports in 2010 comprised 18,865 live animals traded for commercial purposes, of which just over half (53%) were wild-sourced and the remainder captive-bred. All of the wild-sourced specimens originated in Taiwan, Province of China, with the vast majority re-exported via the United States. The majority of the captive-bred specimens were imported directly from Taiwan, Province of China (79%), with the remainder imported directly from China.

M. sinensis was first listed in CITES Appendix III in February 2005, and was listed in the EU Annexes later the same year. EU imports of live specimens almost doubled between 2009 and 2010, with an increase in wild-sourced imports from zero in 2009 to 10,010 in 2010.