This species was selected on the basis of a sharp increase in trade as in 2010, and imports primarily consisted of wild-sourced skins imported by Turkey for commercial purposes. All imports originated in the United States or Canada, the majority re-exported via Germany. Imports of wild-sourced skins increased by 77% between 2010 and 2011, reaching their highest level over the period 2002-2011. No trade in L. rufus to other candidate countries was reported by either candidate countries or exporters in 2011. 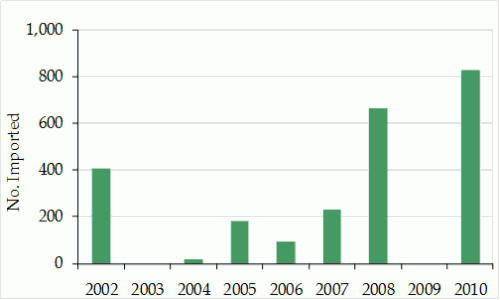 Imports of wild-sourced Lynx rufus skins reported by Turkey, all purposes, 2002-2010 (no imports were reported in 2001).

In 2010, Turkey reported the import of 831 wild-sourced skins for commercial purposes, all of which originated in the United States. The SRG confirmed a positive opinion for specimens from the United States on 27/03/2007.

With the exception of 2009, when no imports of skins were reported by Turkey, imports of wild-sourced skins have increased over the period 2007-2010.