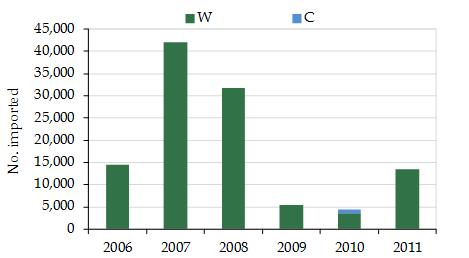 In 2011, Turkey reported the import of 13 480 wild-sourced skins for commercial purposes, all originating in Argentina. Between 2010 and 2011, imports of skins increased three-fold, while the proportion of wild-sourced skins increased from 78% to 100%. No trade in L. gymnocercus to other candidate countries was reported by either candidate countries or exporters in 2011. The SRG formed a positive opinion for wild specimens from Argentina on 02/12/2008.