EU imports of K. homeana consisted of live individuals traded for commercial purposes (312 individuals) which again met the threshold for high volume trade in a globally threatened species.  The majority of individuals were ranched and imported directly from Togo (94%) and the remainder wild-sourced and imported directly from Ghana. Live imports increased by 26% in 2011 compared to 2010. Following the negative opinions for wild-sourced specimens and ranched specimens being confirmed for Ghana and Togo, respectively, on 02/12/2011, a suspension was put in place for wild-sourced specimens from Ghana, and ranched specimens with a straight carapace length greater than 8 cm from Togo, on 10/09/2012 and remains valid. 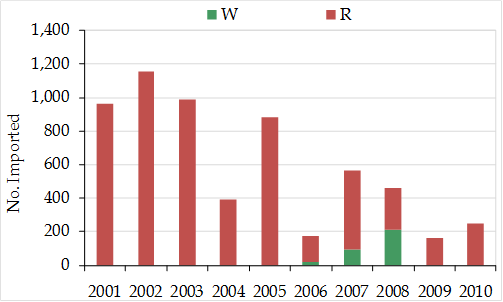