As in 2010, this species was selected on the basis of high volume trade in a globally threatened species and EU imports primarily consisted of wild-sourced teeth, tusks trophies and skins reported under purposes ‘H’, ‘P’ and ‘T’. Wild-sourced trade in trophy items that can easily be equated to individuals (124 trophies, 120 skins, 35 tusks, 1027 teeth, 30 skulls, 29 feet, three tails and one body reported without units, using a conversion factor of two tusks and twelve teeth to one individual) equated to approximately 410 individuals. A permit analysis revealed that some trophy items were imported on the same permits as others, potentially reducing the number of animals involved to 378. This represents an increase of 49% compared to 2010. The majority of the trade in trophy items originated in Zambia and Zimbabwe. As stated in the 2010 EU Analysis, positive opinions are in place for Zambia (formed on 18/07/2001) and Zimbabwe (confirmed on 29/10/2001) and the species has been subject to scrutiny as part of the CITES Review of Significant Trade Process (see AC25 Doc. 9.4 Annex). 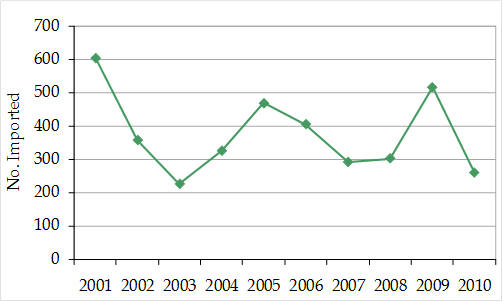 EU imports in 2010 primarily comprised wild-sourced teeth, tusks and trophies traded as purposes ‘H’, ‘P’ and ‘T’. Trade in wild-sourced trophy items equates to approximately 256 individuals, including 130 trophies, 745 teeth (equivalent to 63 individuals, when the conversion factor of 12 teeth to one hippopotamus is applied), 95 tusks (equivalent to 48 individuals, when the conversion factor of two ‘tusks’ to one hippopotamus is applied), 11 feet (three individuals), six skulls, three skins, two bodies and one tail. A permit analysis revealed that three items were imported on the same permit as other trophy items, possibly reducing the number of animals involved to 253. The total number of trophies imported (including trophy items with conversion factors applied if appropriate) decreased by half between 2009 and 2010.