As in 2010, Equus zebra hartmannae met the criteria for high volume trade in a globally threatened species. EU imports primarily comprised wild-sourced skins reported under purposes ‘H’, ‘P’ and ‘T’ (849 skins, plus seven skins reported without a purpose or source specified), as well as other wild-sourced trophies and trophy items, the majority of which originated in Namibia. Wild-sourced trade in trophy items that can easily be equated to individuals (856 skins, 75 trophies, 77 feet, two genitalia, one skull, one tail and one skeleton, including trade reported without a source or purpose specified) equated to approximately 956 individuals. A permit analysis revealed that a notable quantity of trophy items were imported on the same permits as other items, potentially reducing the number of animals involved to 939. Imports of wild-sourced skins increased by 12% between 2010 and 2011. The SRG formed a positive opinion for specimens from Namibia on 02/12/2008. The subspecies has been reviewed as a case study as part of a report on hunting trophies to be considered at SRG65. 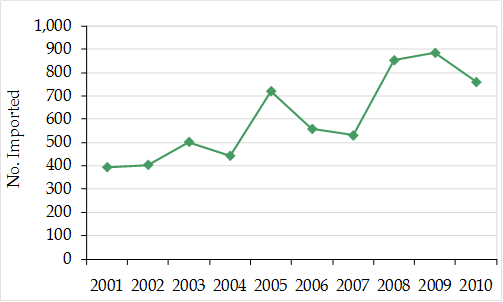 EU imports in 2010 primarily comprised skins (760), hunting trophies (107) and trophy items, reported as purposes ‘H’, ‘P’ and ‘T’. All trade was wild-sourced, with 99% of skins and trophies originating in Namibia and the remainder in South Africa. Imports of skins decreased by 14% between 2009 and 2010.

The SRG formed a positive opinion for specimens from Namibia on 02/12/2008.