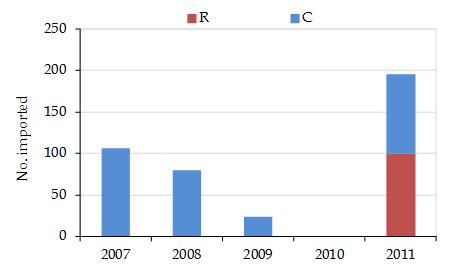 In 2011, Turkey reported the import of 196 live individuals for commercial purposes, of which 51% were ranched and 49% were captive-bred; the vast majority were imported directly from Czech Republic, while 4 individuals originated in the Netherlands. Imports in 2011 were at their highest level over the period 2002-2011; no trade was reported in 2010, and no ranched trade was reported prior to 2011. No trade in C. novaezelandiae to other candidate countries was reported by either candidate countries or exporters in 2011.