C. denticulata was selected on the basis of high volume trade in a globally threatened species. As in 2010, all EU imports were of live individuals traded for commercial purposes. In 2011, the principal source of trade shifted from wild to captive-bred, with 130 captive-bred and 88 wild-sourced individuals imported. The captive-bred animals were all imported directly from the United States and Peru, while the wild-sourced animals were imported directly from Suriname and Guyana. Overall, live imports increased by 18% between 2010 and 2011; wild-sourced imports decreased by 39%. Populations of Guyana and Suriname were reviewed for SRG 59 and positive opinions were formed for both countries on 23/02/2012. 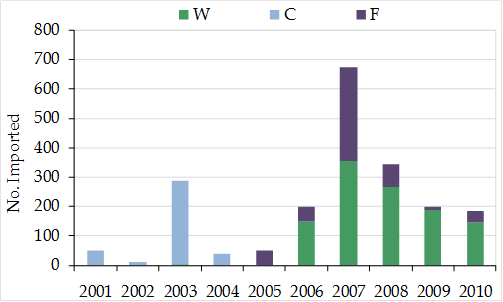 All EU imports in 2010 were live animals, the vast majority of which were traded for commercial purposes. Imports were principally wild-sourced (145 animals), with 40 captive-born animals also imported.

A long-standing import suspension under Article 4.6c for live, wild-sourced specimens from all countries was removed on 10/05/2006; live, wild-sourced imports resumed in 2006 and increased markedly in 2007, but since then imports have decreased every year.

The wild-sourced animals imported in 2010 originated in Suriname (73 animals) and Guyana (72); all the captive-born animals originated in the United States. The SRG formed a positive opinion for specimens from Guyana and Suriname on 23/02/2012.