CITES Appendix:  I (except the populations of South Africa and Swaziland, which are included in Appendix II for specified purposes). 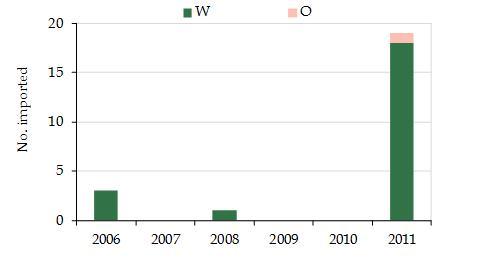 In 2011, EU Member States imported 18 wild-sourced trophies and trophy items of Appendix I/Annex A populations of Ceratotherium simum simum: five trophies, two horns, three feet and eight bones. The horns and bones were all imported on the same export permit, and therefore may have originated from the same animal. All wild-sourced trade was imported directly from Namibia and was reported as purpose codes ‘H’ and ‘P’. In addition, one pre-Convention horn (purpose ‘P) and one source ‘F’ horn (purpose ‘E’) were also imported. Trade in trophy items met the sharp increase criterion as the 2011 trade was more than four times the mean of the preceding five year period. With no trade in Annex A trophies reported 2002-2005, trade levels in 2011 were the highest over the ten year period 2002-2011. No trophy items were reported in trade in either 2009 or 2010; imports in 2010 (1 live, 1 body and 1 skin) were all for scientific/educational purposes or zoos. Trade in C. simum simum is closely monitored through the CITES process following Decisions 16.84 to 16.92.