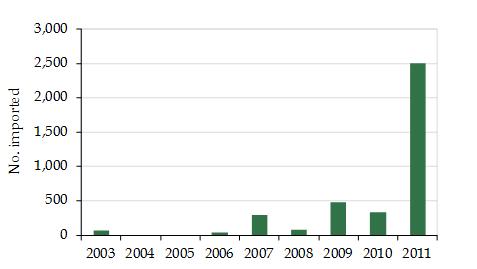 EU-reported imports of live, wild-sourced coral of Caulastraea furcata, all purposes, 2003-2011 (no imports were reported in 2002).

EU imports in 2011 consisted of 2508 live, wild-sourced corals imported directly from Australia for commercial purposes. Imports of live, wild-sourced corals increased more than seven-fold between 2010 and 2011, with levels staying below 500 pieces a year 2003-2010. Adequate management of coral resources generally appears to be in place in Australia (see for instance SRG 64/11). As per CITES Notification No. 2012/047, Caulastraea is one of the coral taxa where reporting trade at the genus level is acceptable; several other species of Caulastraea also occur in Australia.