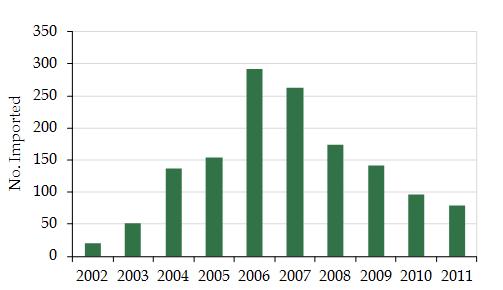 EU imports of Antilope cervicapra in 2011 principally comprised hunting trophies (74), of which 95% were wild-sourced and the remainder reported without a source specified. Four wild-sourced skulls, one wild-sourced body and one captive-sourced skin were also imported. The majority of trade was imported directly from Argentina. Imports of trophies and trophy items peaked at 292 in 2006 and have declined since, decreasing by 19% between 2010 and 2011.